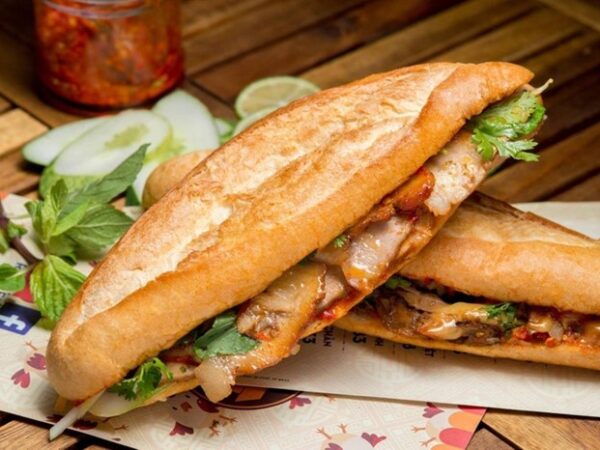 When speaking of Vietnamese food, most international traveller will highlight phở, bánh mì which have traveled beyond the borders of Vietnam and are well-known in many countries in the world. Therefore, the top two spots on the list must include these two dishes.

Bánh mì literally means Bread. However, the term “Bánh mì” is also used by Vietnamese people to refer to Vietnamese bread stuffed with various fillings inside.
Consistently ranking high on lists of the world’s tastiest foods published by renowned foreign publications and websites, bánh mì has usurped pho to become the Vietnamese dish that foreigners like the most. Although you can now get it in even high-end restaurants, bánh mì is still recognized as a type of popular street food throughout Vietnam. However, in each region, this dish is modified with different fillings to meat the local flavors and personal tastes. That’s why there are many different bánh mì variations including pate bánh mì, grilled meat bánh mì, egg bánh mì, etc.

Each version has an unique taste, but they have the same interior ingredients—pickles and herbs—and a thin, crispy crust. A stuffed banh mì can be bought for as little as 10,000 to 30,000 VND, making it a very popular meal that can be found on nearly every street corner.

Just like bánh mì, Phở is a well-known specialty of Vietnam. Beef phở and chicken phở, two popular forms of Traditional phở are thought to have come from Hanoi and Nam Dinh. However, today Pho is a widely consumed dish across the nation. Beef pho and chicken phở are equally popular in the North but in the South and Central region, beef phở is often more known. Today, phở is also made in a wide range of varieties, including stir-fried phở, phở with beef stew in wine sauce, pho rolls, etc. However, traditional beef phở and chicken phở seem to be the most well-liked dishes among foreigners, not only in Vietnam but also in many other regions of the world.

Traditional Vietnamese phở frequently includes a transparent broth made from beef or chicken bones along with various spices like anise, cinnamon, onions, ginger, and coriander seeds. Before being added to the bone stew pot that has been cooking for a few hours, these spices are usually toasted until fragrant. For a richer flavor, the broth is also made with seafood in several northern locations, such as peanut worms and dried shrimp. When eating, people top the thinly sliced rice noodles with chopped green onions, coriander, and many more herbs of your choice before ladling phở soup over them. In the South, people also eat phở with black soy sauce, while in the North, chili and garlic vinegar cannot be missing on the table

Foreign restaurants frequently serve phở with fewer ingredients and herbs. However, the flavor and preparation style of traditional phở are still maintained. Because of this, the majority of diners have fallen in love with pho from the first spoon they take. Once someone learns about this exquisite dish, it is hard for them to forget about it.
In addition to phở and bánh mì, other regional dishes in Vietnam are also increasingly known and loved by many international diners when they have chances to taste them.

Many international visitors to Vietnam like eating Bun cha Hanoi, especially in the summer. Its name clearly identifies its place of origin. Famous chef Anthony Bourdain introduced this dish to US President Barack Obama when the two visited Vietnam, and it made a lasting effect on the friendly former US president. This dish has also appeared in numerous lists of the finest Asian cuisine and best street food, as chosen by CNN and other international food review websites. The main ingredients of bun cha are grilled pork slices or pork balls, vermicelli, thinly sliced carrot, and green papaya. When serving, all of them are soaked in a sweet-and-sour sauce consisting of fish sauce, minced garlic, and chili.

Additionally, fresh vegetables and herbs including marjoram, lettuce, coriander, basil, and mint are frequently served with bun cha. Anytime of the year is a good time to eat bun cha. However, if you can savor a bowl of tasty bun cha that is served with fresh veggies and sweet and sour sauce, the heat and discomfort seem to be reduced by half. Have you tried bun cha before? If not, try it as soon as you can. You won’t be disappointed!

Chả cá Lã Vọng (Lã Vọng’s grilled fish) is said to have originated from a Hanoian family. This is an esoteric dish of the Doan family at house 14, Cha Ca street. After nearly 150 years, this dish still retains its traditional flavor and has become a special dish of Hanoi. Chả cá Lã Vọng and and its original restaurant have received numerous accolades from international media, including selection as one of the world’s top 12 specialties (by Yahoo), ranking as the fifth-best place to visit before you die (by MSNBC), and receiving frequent ratings of 5 stars on numerous other major and minor food travel websites.

The main ingredient in this meal are fillets of crystal eye catfish that have been marinated in a mixture of spices, including turmeric. Along with the fish, other essential ingredients are dill, green onions, roasted peanuts, vermicelli, and a bowl of shrimp paste or fish sauce. When serving simply put the fish, vegetables, and vermicelli in a bowl, add the roasted peanuts, fish sauce or shrimp paste, and stir to combine. Even though the preparation is fairly simple, the robust, meaty fish pieces paired with fresh herbs, the sauce and roasted peanuts will satisfy any diners.

Bánh đa cua is known as a well-known delicacy of of Hải Phòng province. This dish is prepared with dark brown rice noodles rather than white ones. Its toppings include a range of appetizing items such shrimp, chả lá lốt (minced pork or beef wrapped in betel leaves), fried squid balls, fried fish, herbs, and shallots. The broth is prepared from fresh water crabs. Those who have had this dish are not only enthralled by the flavor, but also by the bowl’s vibrant hues. The full bowl of bánh đa cua has a variety of flavors, colors, and aromas that make eaters have to remember forever.

When eating this dish, renowned American chef Anthony Bourdain once proclaimed: “Bun Bo Hue is the best soup in the world.” The main ingredients of Bún bò Huế (Hue beef noodle soup) include thick vermicelli, beef shank, pork legs and flavorful broth featured with the pungent flavor of chili, aromatic lemongrass, and shrimp paste. You must try it once to understand why this dish captivates both local and international eaters’ souls.

Mì Quảng is a rustic dish of Quang Nam province but has been recognized by the Asian Record Organization as one of 12 Vietnamese dishes that exemplify Asian culinary values. Like bún and phở, Mì Quảng is a type of noodles made from rice flour, but the taste is slightly different. The dish can be topped with a variety of ingredients, including beef, shrimp, crab, pig, and fish… A bowl of mì Quảng doesn’t appear to be as full of soup as in bún and phở but tastes just as satisfying with full of flavor. Mì Quảng is usually served with green chili, roasted peanuts, grilled rice paper, fish sauce and 9 different fresh vegetables. The ingredients are simple but they combine to produce a taste that consumers won’t soon forget.

This Hue speciality is made with steamed rice, cooked clams or mussels, or both. This simple rice dish can be topped with a variety of ingredients, such as peanuts, cilantro (coriander), chili peppers, fermented shrimp paste, star fruit, banana flowers, taro, fried onions, crispy pork skin, and roasted sesame. The combination of these numerous ingredients can create an explosion of flavor for those who enjoy it.

Cơm tấm (broken rice) is a popular dish in the South, especially in Saigon. When visiting the southern nation’s capital, many foreign visitors opt to eat this dish and fall in love with it. Vietnamese broken rice was once hailed as “a culinary masterpiece that you will remember the flavor of forever if you only taste it once,” according to American journalist Robyn Eckhardt. Cơm tấm featuring broken rice, richly marinated ribs, a tasty meatloaf and a perfectly eggs is a dish that any foreigners who arrived in Saigon should try once.

In the South, this dish is among the most popular. People need to stew pig bones for a few hours to prepare this dish, which is then served with chewy noodles, intestines, pork liver, minced pork, and raw or lightly poached bean sprouts and chives. They all combined to produce a dish that is well-liked by many foreigners.

Bánh xèo is frequently referred to as “Vietnamese Pancakes” by international travelers because it visually resembles pancakes quite a bit. Banh xeo, however, is prepared and served entirely differently from pancakes. It is the combination of a crispy outer crust and a filling that is typically featured with shrimp, meat, bean sprouts or other similar alternatives. It is usually served with raw vegetables.

Discussing how to enjoy banh xeo, two famous CNN culinary writers Helen and Karryn wrote: “To enjoy this dish like a local, you should cut the cake into small pieces, then which is rolled with herbs in an opaque white rice paper. Finally, it must be dipped with sweet and sour fish sauce, extremely satisfying.” In a poll conducted by CNN in 2015, Banh Xeo was selected as one of the best dishes in Vietnam. 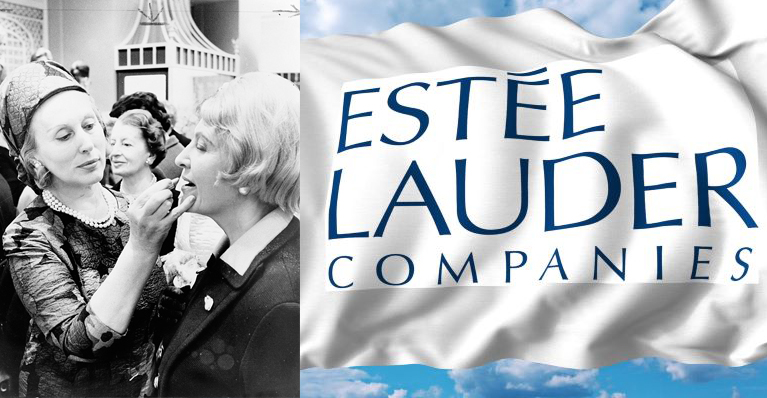 The Estée Lauder Companies Inc. is one of the world’s leading manufacturers, marketers, and sellers of quality skin care, makeup, fragrance, and hair care products. 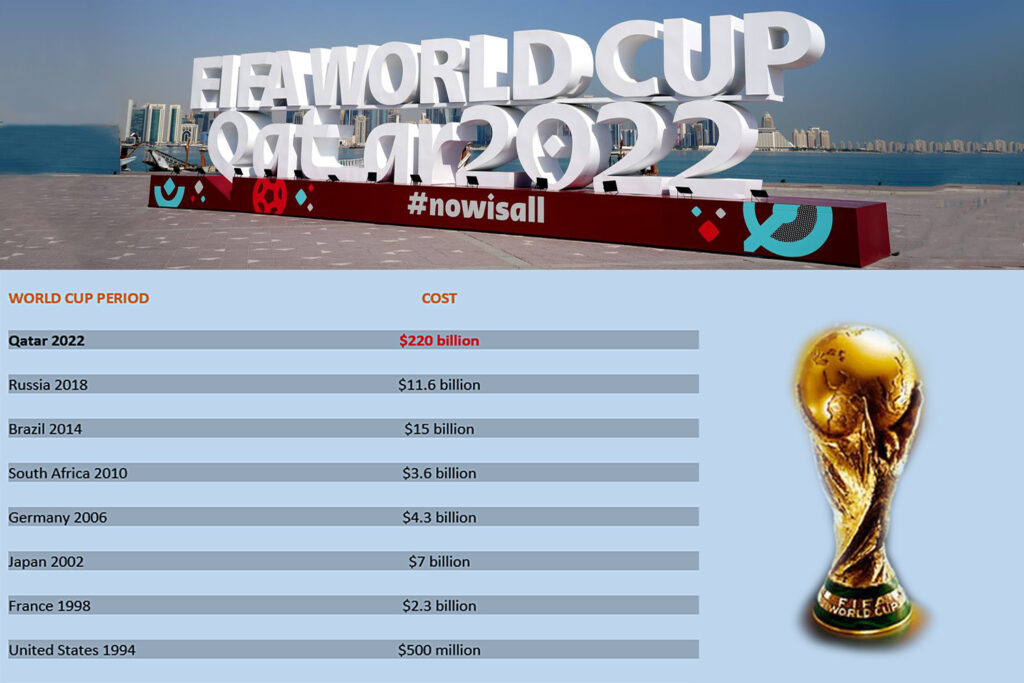 The former FIFA president Sepp Blatter said to the Swiss newspaper group Tamedi that the decision to let Qatar host the World Cup 2022 tournament was a “bad choice.” The reason he stated was: “It’s a country that’s too small,” and “Football and the World Cup are too big for that.” 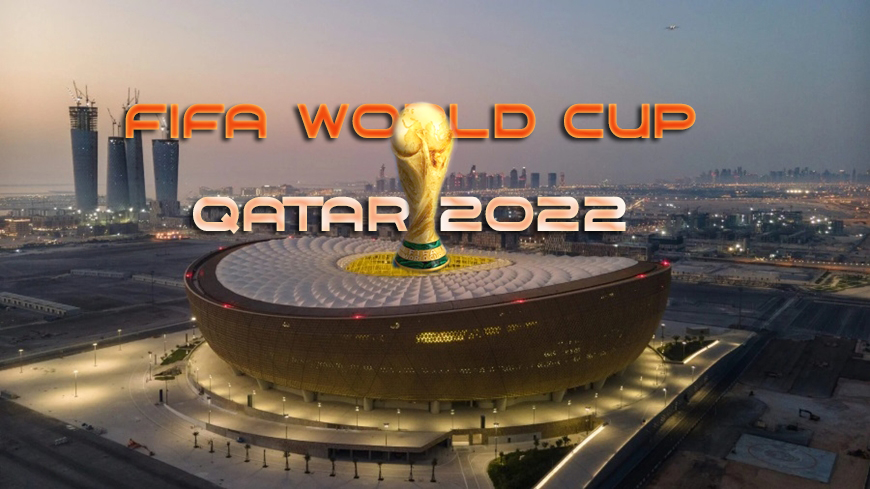 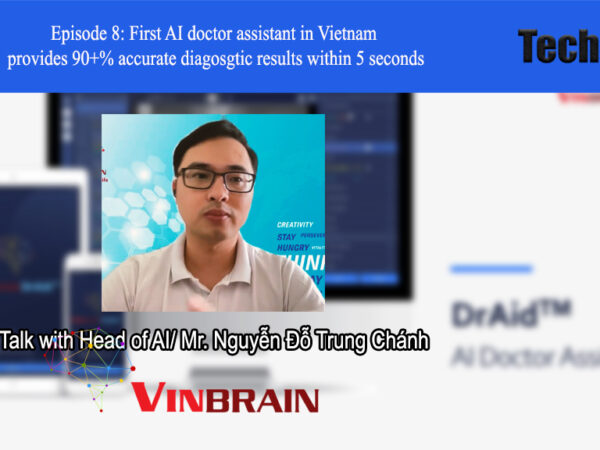 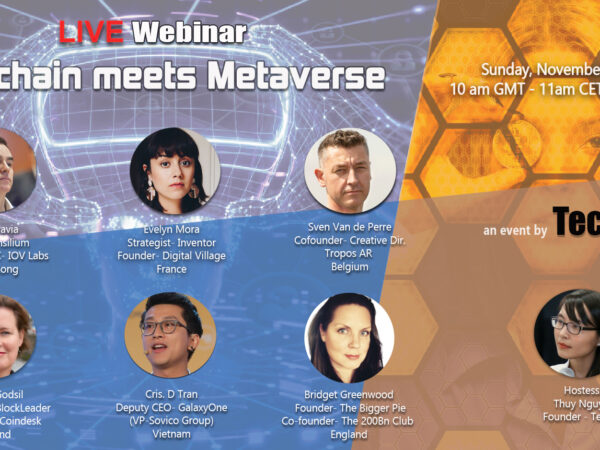 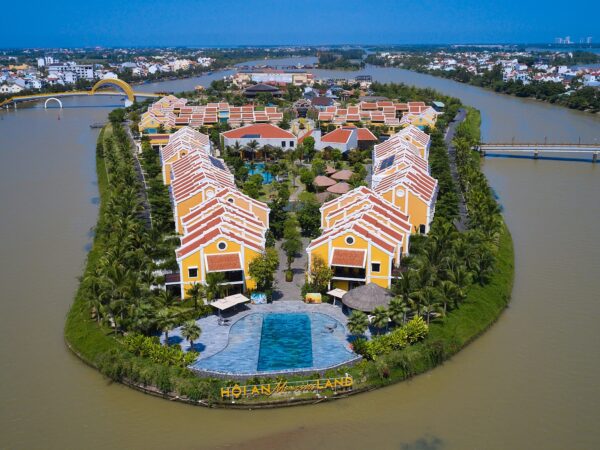 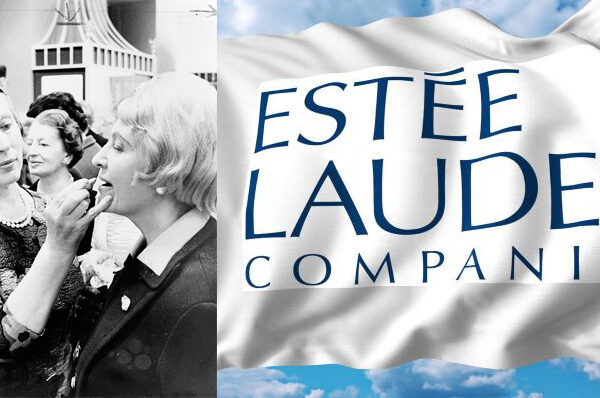 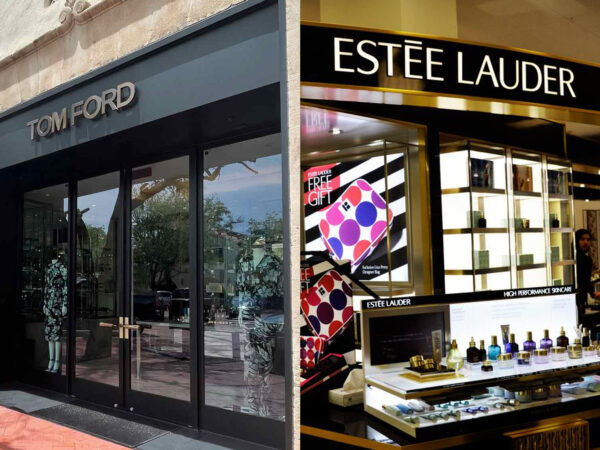 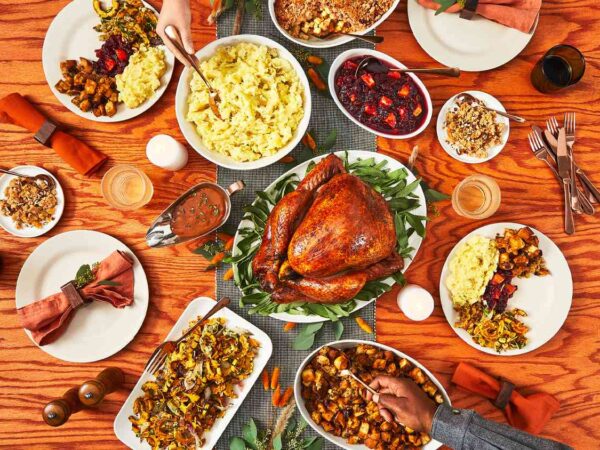 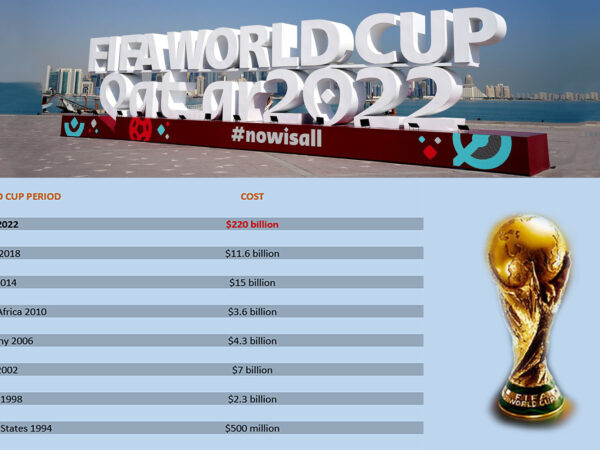 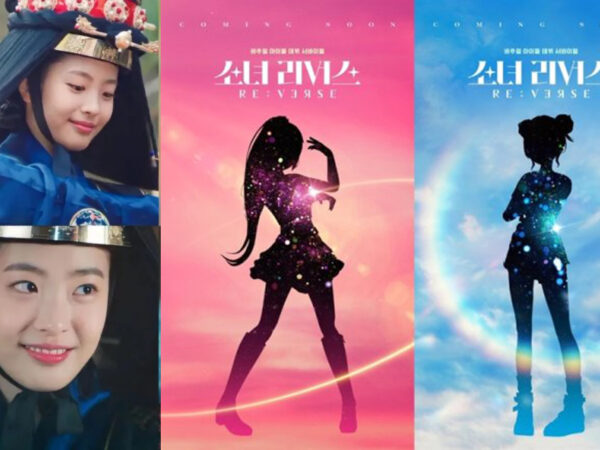