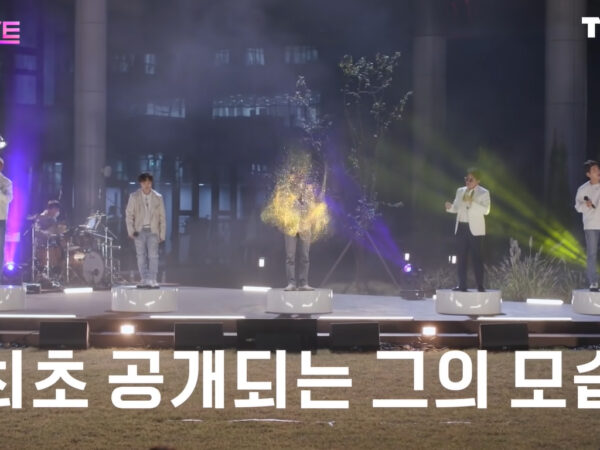 Many people were moved to tears recently when a live performance by the South Korean boy band Ulala Session brought back the late singer Im Yoon Taek, a member of this boyband, with a like-real appearance on stage.
After years of fighting stomach cancer, Im Yoon Taek died in 2013 at the age of 33, leaving behind an one-year-married wife and a four-month-old daughter. The late singer became renown as a symbol of hope after leading his team to the first place on Mnet’s “Superstar K3,” during the time he was diagnosed with terminal stomach cancer. He showed a spirit of a true entertainer and fighter for wanting to stay on stage until his last breath in February 2013.

In the first verse, the four members of Ulala Session, Kim Myung-hoon, Park Seung-il, Park Kwang-sun, and Lee Seung-cheol began the performance by singing “Western Sky”- the song that earned them the first place on Superstar K3 in 2013. Introducing the appearance of Im Yoon Taek under AI’s the recreation in the second verse, Park Seung-il said, “Eight years have passed since my brother left but we still miss him and miss him. That’s why we call him back like this.”

Sitting in the front row of the audience, Im Yoon Taek’s mother and wife couldn’t stop crying when they saw him appear at the center of the stage among his band members. His appearance and performance looked so real that it made many viewers both amazed and touched when they once again saw him on stage after 8 years. The lyrics he sang sounded as if they were conveying his own feelings as well as the emotions of those who loved him:
“On rainy days, I miss you so
Waiting for the day we will meet again
Why does the raining sky make me so sad?
When I want to forget you in my tears…”

The restoration of the like-life appearance of deceased people is one of the many astonishing applications of artificial intelligence technology. The “Alive” concert, which uses AI to reproduce late artists’ performances, gives many fans hope that they may be able to see their favorite performers on stage again after years the artists passed away.