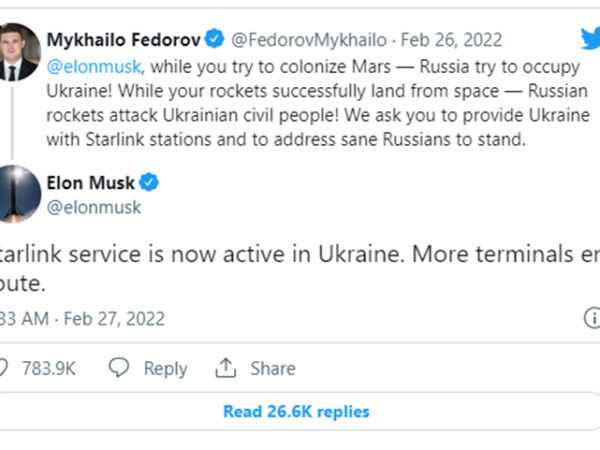 On February 26th, Ukrainian deputy prime minister Mykhailo Fedorov, who is also the country’s minister of digital transformation, addressed a direct message to Elon Musk through Twitter, asking for help for Ukrainians who were experiencing internet outages due to Russian attacks. Only one day after that, Elon Musk responded with an announcement that his Starlink service was activated in Ukraine and more terminals are also one the way.

Starlink is a SpaceX-operated satellite-based internet system that aims to deliver faster internet and internet access to most parts of the world, particularly where broadband providers are not currently available. SpaceX claimed that Starlink’s users can expect its satellite internet speed of between 100-500 megabits per second which is faster than the regular broadband speed (around 136 megabits per second) and mobile speed (54 megabits per second) in the US*. Starlink’s beta internet service is now said to be available in 29 countries.
According to a recent report by Reutter, internet connectivity in Ukraine has been severely affected by Russian attacks. The report notes that Ukraine’s main internet service provider, GigaTrans, has seen availability drop to less than 20 percent of typical levels.

Therefore, Elon Musk’s immediate move to assist in the provision of internet in Ukraine using Starlink has received widespread support and praise from both Ukrainians and internationals.

Minh Anh Pham, based on the information from Reutter, CNBC, Starlink and Twitter