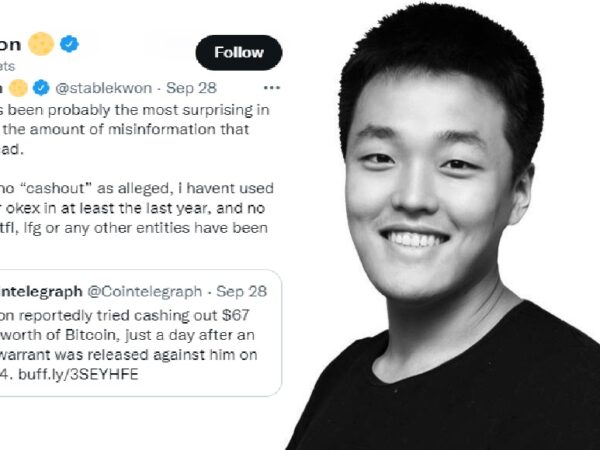 Do Kwon, the co-founder and CEO of Terraform Labs, has recently been the subject of reports in several media that Interpol and the South Korean government had issued an arrest warrant for him. Do Kwon and his business are accused of being responsible for the crashes of the UST and Luna coins, which had a significant impact on investors.

Later, according to Cointelegraph, Do Kwon was attempting to cash out $67 million worth of Bitcoin through the exchanges OKX and Kucoin. As a result, 1,354 BTC were sent from a recently created wallet called Luna Foundation Guard (LFG) to the Kucoin exchange. This wallet also sent 1,959 BTC to the OKX exchange. The Bitcoin transferred by this wallet was immediately frozen by Kucoin Exchange in response to the South Korean government authorities’ request. The OKX exchange, however, ignored the request.

On his Twitter, Do Kwon strongly denied the aforementioned accusations, claiming that everything had been made up. The CEO of Terraform Labs has continued to update his Twitter frequently since the Terra ecosystem crisis and has demonstrated that he is prepared to defend himself from any charges.
On September 18, following many newspaper reports that he was fleeing and wanted by Interpol, Do Kwon stated, “I am not “on the run” or anything similar – for any government agency that has shown interest to communicate, we are in full cooperation and we don’t have anything to hide”.

Further, on September 28, Do Kwon denied the claims made by Cointelegraph: “There is no “cashout” as alleged, I haven”t used Kucoin or Okex in at least the last year, and no funds of TFL, LFG or any other entities have been frozen.”

The collapse of the Terra ecosystem in May of this year erased more than 40 billion USD from the roughly $1 trillion cryptocurrency market. As no signs of a recovery have been seen in the values of any cryptocurrency, this incident is still having a significant impact on the market. Furthermore, it raises concerns among many people regarding technological vulnerabilities and the serious risks that investors may face. However, the majority of industry experts and long-term investors are still upbeat and believe this market will soon rebound.