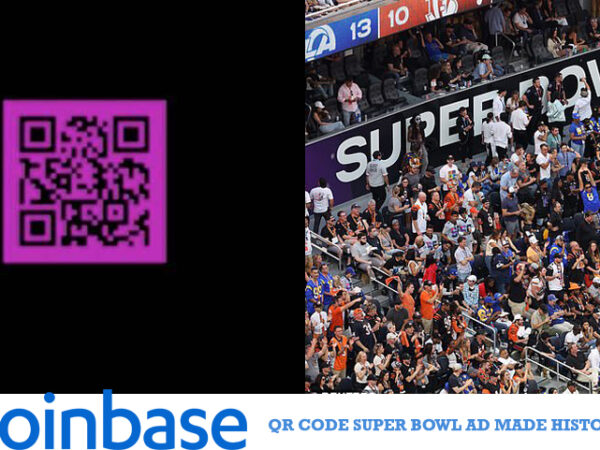 The Super Bowl is the annual playoff championship game of the National Football League (NFL), which draws a large audience both inside and beyond the United States. As a result, companies must spend a significant amount of money to promote at this event, and the cost will continue to rise year after year. A 30-second commercial in this year’s Super Bowl costs $6.5-7 million.
Coinbase, the world’s second largest cryptocurrency exchange, spent over $14 million on a 60-second Super Bowl commercial this year. Instead of presenting grand investment imagery, Coinbase wowed viewers with an image of its QR code bouncing around the screen, recalling the famous bouncing DVD logo meme.

This amusing QR commercial made such an impression on viewers that it rendered Coinbase’s website inoperable for around an hour. The reason for this was that visitors would be redirected to Coibase’s website after scanning the QR code, where they might register for an account and received a free 15 USD worth of cryptocurrency. As a result, Coinbase received more than 20 million hits to its website in less than a minute, breaking the previous record by 6 times. Furthermore, the number of users installing the Coinbase app increased, propelling it from 186th to 2nd place in terms of popularity.

On Twitter, Coinbase’s Chief Product Officer, Surojit Chatterjee, admitted that the event was “historic and unprecedented.”
The success of Coinbase’s ad is expected to contribute to the following year’s Super Bowl advertising cost setting a new record.